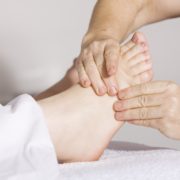 Acupuncture originated in ancient Chinese medicine and uses meridian lines, which represent pathways connecting the body’s organs, to guide the placement of needles. These needles may remain in place for 15-30 minutes and the goal is generally to restore balance and proper flow of energy (known as Qi) in the body. This is typically performed in order to treat various physical, mental, and emotional complaints.

Dry Needling is used to treat musculoskeletal pain and movement impairments. This treatment method has origins dating back to Dr. Janet Travell and Dr. David Simons in the 1940s when they began treating trigger points with injections, often referred to as “wet needling.” Trigger points are “hyperirritable spots in a taut band of skeletal muscle that is painful on compressions, stretch, overload, or contraction of the tissue which usually responds with referred pain that is perceived distant from the spot” (Simons et al 1999). In 1979, Karel Lewit began the practice of Dry Needling, concluding that mechanical stimulation alone – without medication – caused relief. When performing the dry needling technique, the goal is to elicit a local twitch response, which is a spinal cord reflex causing contraction of muscle fibers and increased electrical response that, when diminished, causes relief and increased function of the affected area. Unlike acupuncture, dry needling is not meant to increase energy flow, but rather to trigger a muscle response. Needles used in dry needling are not left in for an extended period of time.

Dry needling can treat a number of ailments, including hamstring tightness, tennis elbow, as well as common muscle soreness, and even headaches. Of course, the causes of the original deficit could be many so it is equally important to assess and investigate following any techniques performed in an effort to prevent recurring symptoms.

Manual Therapy and its Importance in Physical Therapy

How Does Physical Therapy Help in Concussion Recovery?
Scroll to top